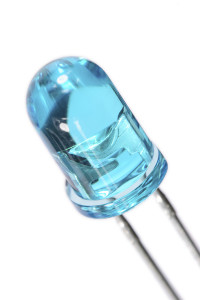 The Royal Swedish Academy of Sciences recently awarded the 2014 Nobel Prize in Physics to Isamu Akasaki, Hiroshi Amano and Shuji Nakamura for the development of the blue light-emitting diode (LED). Their technological breakthrough started a revolution in lighting that is continuing to this day.

Blue Light—How Is That A Revolution?

White light contains three primary emission elements—red, green and blue. While red and green LEDs had been around for decades, blue light was missing. As a result, LEDs could only be used in colored lighting applications.

Blue light remained a challenge for many years. Akasaki and Amano, working at Nagoya University, and Nakamura, working for Nichia Chemicals, produced blue light from their semiconductors in the 1980s. By 1992, they were able to produce the first diode emitting bright blue light. The result was the ability to produce white light from LEDs.

What Is LED Lighting Used For?

LED lighting is highly efficient and longer-lasting than traditional incandescent and other lamps. It’s cool to the touch, more resistant to shock and vibration, and contains no mercury. It’s small size creates new possibilities for illuminating spaces. Today, the LED is competitive in a broad range of lighting applications, from homes to office buildings to streetlights. The U.S. Department of Energy projects market penetration to reach 15% in 2020 and 40% in 2030, nearly the total energy consumed by 24 million U.S. homes today.

Meanwhile, the revolution marches on as LEDs continue to steadily improve in energy efficiency, service life, cost and performance.

“The Laureates challenged established truths; they worked hard and took considerable risks. They built their equipment themselves, learned the technology, and carried out thousands of experiments. Most of the time, they failed, but they did not despair; this was laboratory artistry at the highest level.”

Congratulations to Isamu Akasaki, Hiroshi Amano and Shuji Nakamura for their breakthrough that is now transforming how we light our homes and businesses.