LED Lamp Life: What to Expect 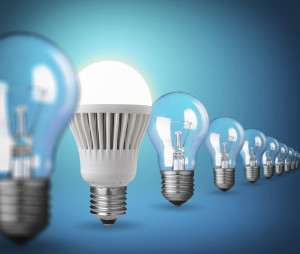 LED replacement lamps promise a number of benefits for consumers, including energy savings, no mercury content, greater resistance to shock and vibration, and being relatively cool to touch during operation. Another major benefit is long service life.

LED lamps carry estimated lifetimes of up to 25,000 hours or longer. At four hours per day, that’s 17 years. At that rate, the light you install in your baby’s room won’t need replacement until he or she is getting ready to go off to college.

Even then, the lamp may still be operating. LED lamp life (L) is estimated based on average lumen depreciation. Over time, the lamp produces less and less light as is it did when it was brand new. An L70 life estimate of 25,000 hours means that after that much operation, an average lamp will only be producing 70% of its original light output.

At 25,000 hours, the lamp may still be operating, but may become dim enough that it’s no longer useful. When to actually replace the lamp is up to you and your lighting needs.

What’s The Life Span Of An LED Lamp?

Most people aren’t used to this with their home lighting. LED lamps typically don’t fail like typical incandescent/halogen and compact fluorescent lamps, which exhibit “catastrophic failure.” In other words, when these lamps fail, they stop producing light. LED lamps tend to exhibit “parametric failure.” Either the lamp dims to a point where it’s no longer useful, or the color quality of the light shifts (typically toward blue) such that it’s no longer useful.

The typical life estimate of 25,000 hours is a very long time. So long, in fact, it’s difficult to test. During this time of rapid development of LED lamps, by the time the product is tested, a new version may already be ready for the marketplace. Instead, manufacturers test the LEDs up to 10,000 hours and then extrapolate to 25,000 hours. When the LEDs are put inside a lamp or luminaire, the manufacturer estimates average product life based on how the product is designed.

Can I Have An LED Lamp In My Home?

In December 2014, the U.S. Department of Energy (DOE) tested 15 LED A-shape replacement lamps readily available in retail stores and targeted to home use in 2013. Ten samples of each of these lamp models were tested, with weekly measurements. The lamps were operated continuously for more than 7,500 hours. The results were compared against each other and also to a benchmark halogen and compact fluorescent lamp.

Notably, the lamps were tested at an ambient temperature of 45°C. This is above what would be encountered in an open luminaire such as a table luminaire, but about what the lamp would experience if operated in an enclosed luminaire such as a downlight. LED life can be severely shortened by operation in high ambient temperatures. In fact, most of the lamps tested by DOE explicitly warned buyers not to use them in enclosed luminaires for that reason. DOE did so anyway to create a stress test, which allowed a greater differentiation in performance between the lamp models—the focus of the study.

The Difference In LED Lamps

On average, the LED lamps exhibited better lumen maintenance than the halogen and compact fluorescent benchmark lamps. There was considerable variation from lamp model to lamp model, though consistency lamp to lamp within each model was relatively good. Operation in a high-ambient-temperature environment, such as enclosed luminaires, can induce failure of the LEDs long before their expected lifetime. If such degradation in light output is unacceptable, make sure the lamp is operated under conditions prescribed by the manufacturer.

LED lamps are designed to provide long service life, but your mileage may vary based on the product you buy. If the lamp dims to an unacceptable level, it may be time to replace it even though it is still operating. To get the most life out of your lamp, operate it under conditions recommended by the manufacturer, particularly in regards to ambient temperature.