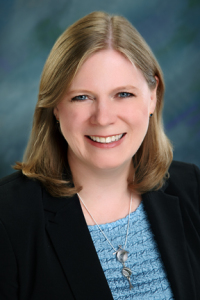 By now, most homeowners have heard of LEDs—many may even use them in their homes—but now OLEDs are making an entrance in the marketplace. We asked lighting designer Leslie North of Aurora Lighting Design to share her insights on this emerging technology.

Q. Can you describe what OLEDs are and how they differ from LEDs?

A. OLED stands for Organic Light Emitting Diode. It is an organic semiconductor material sandwiched between two electrodes.

I think of OLEDs as the little sister of LEDs—same digital family signature, but different personality. Both are solid-state lighting. Both require driver components and controls compatible with those drivers. LEDs are point sources: very small, intense, and directional. This makes them highly effective as spot lighting, and a lot of luminaire design effort is put into directing, shaping, and softening that beam. Glare control is another huge issue in LED luminaire design.

OLEDs, on the other hand, are diffuse planar sources. Provided you limit the intensity (brightness), you can view them directly for a long period of time with no discomfort. The effect is that of the soft glow of evenly backlit glass, but it’s only about ¼-inch thick. That means that most OLED luminaires express the OLED rather than hide it like LEDs.

OLEDs are where LEDs were several years ago, but have benefitted from the learning curve of big brother going first in the industry. OLEDs are still in the early adopter stage with prices currently high compared to traditional sources, but they are expected to drop rapidly with technology advances. Color rendering is very good and color variation is stabilizing. We can expect the availability of product and everything qualitative to improve over the next couple of years.

Q. What are the benefits to using OLED technology over other kinds of sources? 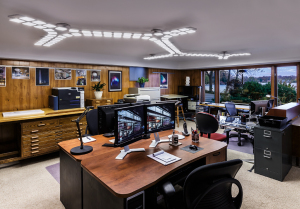 A. OLEDs are cool to the touch, and they don’t require meticulous heat management the way LEDs do. LEDs require good heat sinking to pull the heat off the back in order to maintain the LEDs output and longevity.

As a planar source, fixtures can be incredibly thin, limited only by structural integrity and wiring continuity. OLEDs are getting so thin that some are even bendable. And you can have custom shapes and sizes. This permits manufacturers to create even more interesting non-traditional shapes and designs.

There’s also a good sustainability story here. OLEDs don’t contain mercury or other hazardous materials. Due to their thin size and lack of extra heat sink, there’s less material needed in the luminaire. Longevity is very good with a 30,000 to 40,000 hour life at full output rising to 50,000 to 70,000+ hour life when dimmed.

And of course, there’s the aesthetic impact. The first impression with an OLED is often What’s that? You want to investigate it; you want to engage with it. Several OLED installations to date are interactive/art installations with the OLEDs reacting via sensors/controls to people in the space.

Q. Tell me a bit about a recent residential project where you used OLEDs. 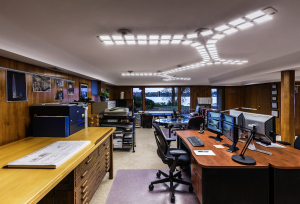 A. The existing lighting was what you find in many renovated residential basement build outs: good-quality residential-grade R-lamp downlights. There were eight downlights spaced within the existing drywall coffer which had been retrofit various times with screw-based compact fluorescents and later, dimmable screw-based LED PAR lamps. Desktop task lighting supplemented, which remained after the renovation. The occupant complaints were uneven lighting, overhead glare, and occasional difficulty reading the computer screens, which all had anti-reflective screens. The office has multiple horizontal work surfaces, as well as several computer screens, so lighting to reach each work surface and controlling glare, both in the screens and directly from above, were key concerns.

The primary goal was to provide high-quality functional office space lighting that helped to foster creative thinking, but required the ability to convert the space to residential rec room use at a future date without changing the lighting. The final product needed to fit well aesthetically in the space for both uses, and either recess or fit close to the ceiling since the height is only marginally above 7 feet high. Desired characteristics were a “wow” factor, energy efficiency, minimal maintenance, and the ability to dim.

Major installation challenges were that we had existing hard ceiling construction to remain with only electrical access through holes cut into the ceiling and a vertical opening in the adjacent unfinished storage area. Also the office needed to continue operation through construction. Drywall repair—not electrical—proved to be the most pressing concern. From the electrical standpoint, there was a learning curve for the new technology and since our system had interlocking components, getting the electrical feed locations precise was critical. (The adjacent unfinished storage room was an asset to the project in that it became the location for the remote drivers and the 0-10V dimming converter control box.)

Q. How energy-efficient are OLEDs?

Q. What are some other good applications of OLED technology in the home? 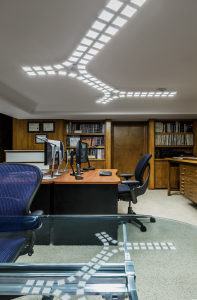 A. It’s hard to say “best” at this point since the technology and products available are still evolving. There are many uses where OLEDs would work in the home: decorative chandeliers, embedded in mirrors, and wall sconces/wall accent. OLEDs embedded into mirrors is a really cool application in that not only can you dim, but you can selectively dim the pattern so that you have light ringing the mirror, or running vertically on either side, or filling the mirror as general lighting depending upon control selection.

Q. Are there any downfalls to using OLED technology?

A. A current limiting factor, particularly for retrofits, are the controls. Most are 0-10V control which typically only dim down to 10%, not fully down to 1% or off. 10% is low enough for our application, but for an intimate dining experience you may wish to dim further. You also need to have some place to put the driver(s) and dimmer interface boxes. Don’t expect to use your current incandescent wallbox dimmer with OLEDs at this time.