What’s the Benefit of LED Lights? 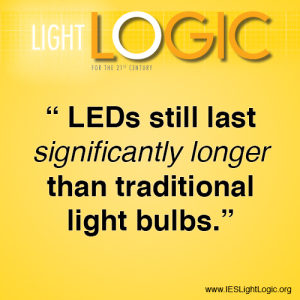 If you are an energy-conscious home lighting aficionado, you probably strive to use more energy-efficient light bulbs in your home. Rather than traditional incandescent bulbs, you may make use of CFLs (compact fluorescent lamps). However, there is another energy-efficient option out there – LEDs, or light emitting diodes. While LEDs are  more expensive initially, they offer significant  return on investment (ROI)in terms of energy savings. Furthermore, LEDs are convenient because they last for much longer than traditional light bulbs, meaning that you both save money and do not have to change your bulbs as often.

The main difference between LEDS and standard light bulbs lies in the wattage. Compared to a 60-watt incandescent bulb, an LED bulb can provide the same amount of lumens while using only 13 watts. In addition to using fewer watts, LED bulbs provide the same amount of light over a much longer period of time. While traditional light bulbs last  less than 2,000 hours, LEDs are rated for 25,000-50,000 hours, depending upon the power supply. Even on the lower end of the spectrum, LEDs still last significantly longer than traditional light bulbs.

One example that illustrates the savings LEDs provide compares a standard 60-watt bulb to a 12-watt LED, which is rated for 25,000 hours and costs $40. If the lamp is on for six hours each day, you will ultimately spend $3.12 per year to operate it with an LED bulb compared to $16 per year with an incandescent bulb. In addition, your LED bulb will last for about 12 years, during which time you would need to buy 24 incandescent bulbs (about $18 or $1.50 per year). Overall, you will save $14.30 per year, allowing the cost of your LED bulb to cancel out after less than three years.

Along with savings  in your energy costs, LED bulbs are also a better option than traditional bulbs because they are more convenient. As we discussed above, LED bulbs last significantly longer than traditional incandescent bulbs or even CFLs. This means that you will spend less time seeking out new bulbs and changing your light bulbs.

Are you still struggling to make the switch to LEDs? Many avoid switching to LEDs because the bulbs are so expensive upfront. However, with energy-efficient options becoming more popular, commonplace, and improved over time, it is likely that LEDs will continue to drop in price. To calculate the ROI of LEDs for you, check out this LED ROI calculator.